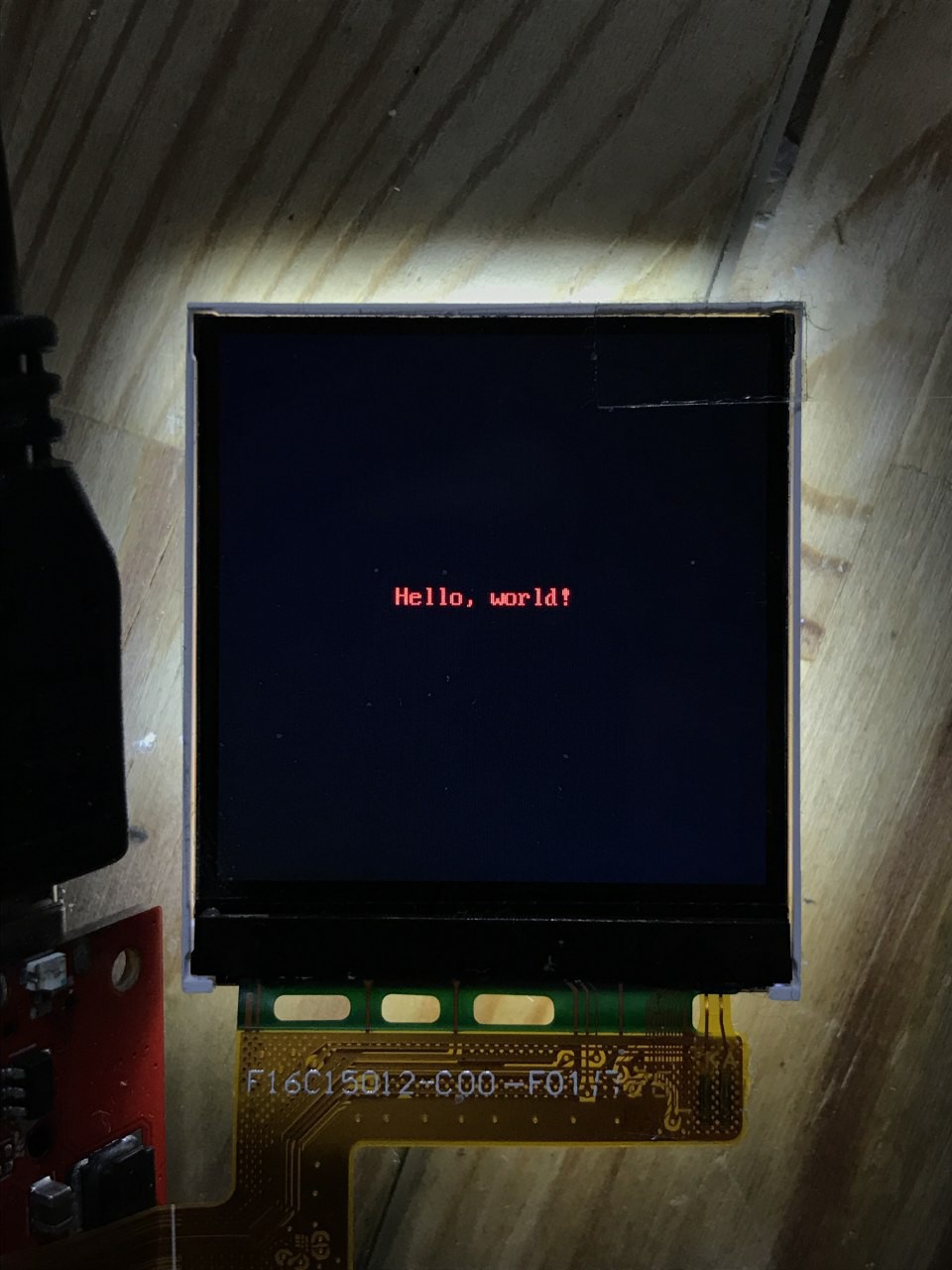 The MIPI-DSI interface is widely used on cell phones and smart watch screens because it requires fewer IOs thus can provide some advantages in terms of connector size and routing difficulty. Obviously, as a screen enthusiast, I can't ignore this common screen interface. But I haven't had the chance to study it myself, so I took the opportunity of VerilogBoy to understand it in general. Given that MIPI is a proprietary interface, there are not many detailed descriptions of it on the Internet. This post is more or less just sharing my understanding of the MIPI DSI. This article is intended as an introductory reference for engineers or amateurs who need to debug MIPI screens.

What is important to know is that MIPI DSI is still just an interface for connecting screens, not for connecting monitors. Common examples of the former are DBI (including 8/16-bit parallel port and SPI), DPI (also known as TTL, RGB and PixelBus, etc.) and LVDS (also known as FlatLink), while common examples of the latter are VGA, DVI, HDMI and DP. The characteristic of the former is that usually the software driver contains screen specific parameters (like timing and voltage) and different screens require different drivers (or different parameters for the same driver). For the latter, the driver is usually generic and the display can transmit relevant parameters (e.g. EDID) to the driver via DDC/CI or other means, and the driver generates the required signals based on the information obtained. Generally speaking, the former is mostly used in embedded scenarios. However, note that eDP is a monitor interface that targets embedded usecase, which competes with DSI. This article only discusses DSI. The DSI is mostly just the definition of the physical layer and transmission layer, the screen operation is mostly same as the DBI and DPI. Or in some ways, DSI is kind of DBI and DPI packed up, so they can share a few pairs of differential lines together for transmission. All of the following discussion considers only one-way transmission from the host to the screen.

By default, both data lines and clock lines are in LP mode (CLK+/CLK- are both high) after the screen is powered up. The clock lines in LP mode can enter HS mode using the following sequence:

Pull CLK+ low first, then pull low CLK-, wait for a while and start HS transmission. Data lines could use the similar sequence to enter HS mode:

Compared to the clock lines, data lines has additional synchronization process. Before data transmission, the 00011101 sequence needs to be sent. Once synchronized, the data must be sent continuously. Otherwise it needs to return back to LP mode.

It's also possible to transfer data in LP mode, by using the LPDT (LP Data Transmission) in the escape mode. Note only data lines are shown here, as LPDT doesn't use clock lines. Typically clock lines stay at LP-11 (both clock lines at 1.2V). The clock could be derived by doing D+ | D- (OR). 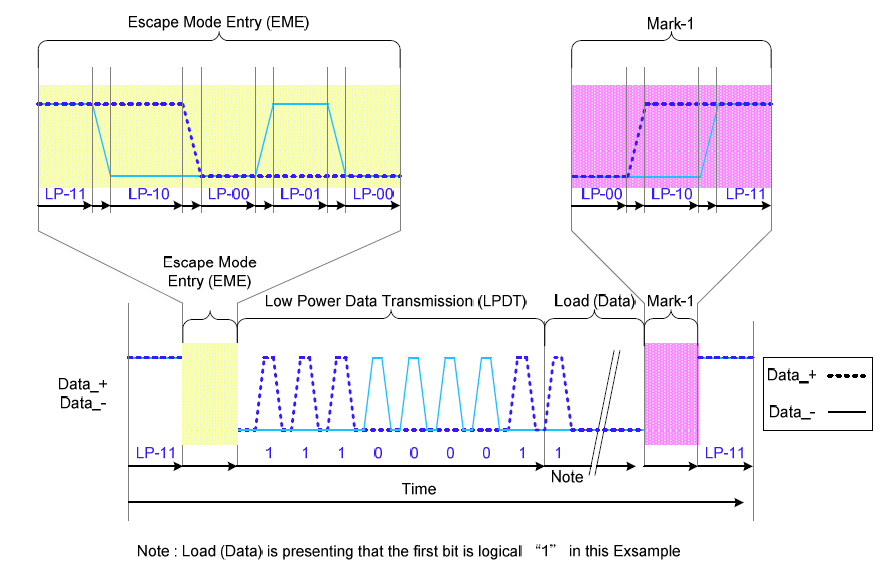 For the DI, highest 2 bits are virtual channel ID (VC), used when there are mutliple devices sharing the same DSI link, typically 0. The lower 6 bits are data type (DT), which could be one of the predefined values.

ECC is only for the 3 header bytes, which could be calculated as following:

CRC for long packet is not discussed here. In practice it's generally fine to set them to 0.

Conceptually, DSI transfer could be roughly divided into 2 modes, command mode and video mode. The command mode is similar to the DBI screen. Command or data could be sent to the screen, to writing controller registers like power or display mode, or writing pixels to the controller display RAM. These packets are not synchronized to the screen's scanning, so there is no limitation/ requirement on the data rate. Video mode is similar to DPI screen, the data is always continuous pixel data and HVsync. HVsync signals controls the screen scanning, so the date rate must match the pixel rate (at desired refresh rate, like 60Hz). DSI supports both, and typically screen needs both: command mode for configuring the power supply (and sometimes gamma), and video mode for transferring the image. The video mode is only valid in HS mode, however command mode is available in both LP and HS. Note that certain LCD controllers may not accept commands in HS mode, so it's recommended to send commands only in LP mode.

The real difference between these 2 modes are just the packets being sent, so there is "mode switching" like between the LP and HS mode.

There are 3 common data types in command mode:

The first two are short packets, and the last is a long packet. The use is based on the command length.

There are 9 common data types in video modes. The following are for sending synchronization signals, all of them are short packets:

The following are for sending pixels, all of which are long packets:

These packets could be used to reconstruct the DPI signal. Start packets sets the signal to valid, and end packets sets it to be invalid. Blanking packet sends pixels with DE being invalid. Pixel stream sends pixels with DE valid. Notably, in DSI, Vsync start and vsync end would imply hsync start, so no hsync start is not sent during the first line. Start could also be treated as the valid edge of the sync signal, so end packets are optional.

The video timing of DSI is similar to that of VGA and DPI: 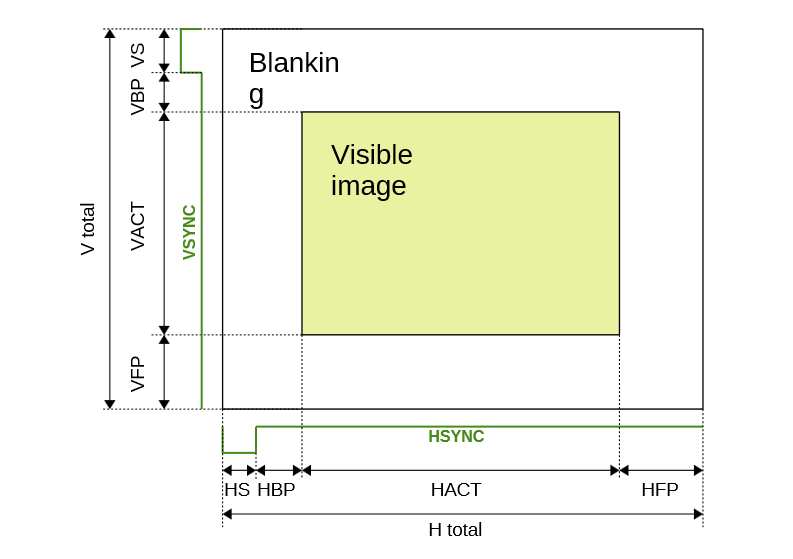 The sequence of a frame in pseudocode:

Overall, the screen initialization sequence should be as the following: